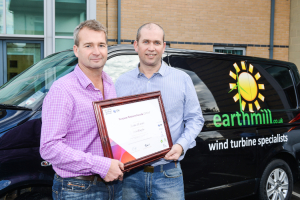 Yorkshire renewables firm Earthmill has been shortlisted for a prestigious European business award and is hoping to beat off competition from 26 other European finalists to be crowned European Business of the Year.

Rapidly growing Earthmill, based in Wetherby, is one of just five British companies shortlisted by a panel of judges.

The firm is urging other Yorkshire businesses and the public to support the local firm with online votes to ensure it carries off the top accolade of National Champion for the UK in this year’s highly prestigious European Business Awards.

Winning the competition could pave the way for Earthmill, which provides and installs small to medium scale wind turbines on farms across the UK, to take the coveted title of overall European Champion which will be announced at a gala event in May.

“2013 has been amazing for us, we have grown at a phenomenal pace,” said Steve Milner, managing director of Earthmill, which he founded in his garage in Spofforth in 2009 and today employs around 30 people with an annual turnover of £13m.

“The public vote, which closes on January 2, means a great deal as it is our existing and potential customers and clients giving their approval to our success,” he added.

“There are many farms that are under financial pressure, whether it be milk prices, feed costs or rising energy bills. By installing a small scale turbine on their farm they are able to improve their financial position, secure their future energy costs and reinvest in other areas of their business.”

Earthmill, already named as one of the National Champions in the internally judged part of the competition which is sponsored by RSM International, has submitted a video of its company online (see link below), giving an in-depth story of their business and its successes.  It will now compete against all other 26 national champions for the public vote.  The company with the most votes will be named National Public Champion on January 14.

Adrian Tripp, chief executive officer of the European Business Awards said: “The public vote is a very important part of the awards as it gives these entrepreneurial companies another way of show-casing their achievements to a wider audience across Europe.  It was a huge success last year with over 35,000 votes cast.”

A final round of voting between January 14 and March 25 will result in the selection of one overall European ‘Public’ Champion’.  The winner will be announced at the Awards Gala event in May.