Farmers and landowners in Dumfries and Galloway are set to receive the green light for planning after the MoD has withdrawn objections around the Eskdalemuir Seismic Array facility.

Hundreds of farms in the original exclusion zone, which covered close to 8,000 sq km, will now be able to apply for permission to install agricultural-scale turbines in some of the UK’s most productive wind country.

The original 80 km radius exclusion zone, which was claimed to be necessary by the MoD to avoid the interference with measuring sensors, was reduced to 50 km a decade ago.  This has now been reduced to 15 km following extensive research and will include just over 700 sq km of mainly farmland around the measuring facility.

“This decision offers dozens of landowners and farmers the chance to earn significant income from electricity generation. Given the topography of the land we are talking about and the wind speeds, it potentially represents some of the UK’s best land for generating electricity from wind,” said Earthmill managing director Steve Milner.

“There are around 800 live planning applications for individual medium-scale turbines around the UK at present and we are likely to see more from Dumfries and Galloway boosting that total as a direct result of this decision,” he added.

Motivated by a combination of commercial and environmental benefits, more and more farmers are looking to reduce their own farms’ rising energy costs, generate additional revenues and help the environment at the same time by installing farm scale turbines.

New data shows that in March this year the power generated by renewables overtook that made by nuclear power for the first time, a sign of things to come as the UK’s wind energy sector matures.

The development of wind farms, as well as the less prominent individual small and medium agricultural-scale turbines that farmers are installing right across the UK, is swelling the proportion of renewables power the country is producing, especially during high-consumption winter months when wind speeds also tend to be higher.

“Each 225 kw medium-scale turbine can provide enough power for around 150 homes. For farmers, a turbine also results in a drastic reduction in billed power consumption and so this action by the MoD has given new opportunity to a great many farmers in the region,” added Mr Milner. 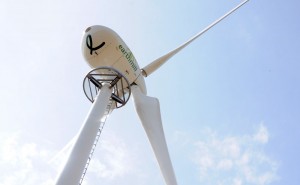